The 2014 Model Engineer Exhibition in Sandown, Surrey is shaping up to be a great success with an exceptional array of outstanding models on display. Neil Wyatt reports on the first day of the exhibition (12 December 2014).

Although I am editor of Model Engineers' Workshop, I have never attended the Model Engineer Exhibition before, largely as I live closer to other shows. nevertheless, I greatly enjoy each year's exhibition reports and have long been keen to come and seem it for myself - there can be little argument that the standard of entries in MEX is superlative.

This taster of the exhibition leaves out much more than it includes, so please forgive me if your model/club/stand isn't mentioned! There will be detailed write ups in ME (with better pictures - I saw Diane Carney and her mum working hard with a proper background to photograph the competition models!) I will also cover tooling at the show in more detail for MEW. To get a closer look at pictures, right click and select 'view image'.

I left home at some ungodly hour, but fortunately the weather was clear and relatively dry, if windy, and I managed to reach Sandown not long after eight o'clock. As well as a few of my own model for loan, I had also brought along Mike Checkley's vice which is being serialised in MEW at the moment.

I found myself assisting with the task of placing labels on the competition entries. I could just about work out that the pair of paraffin lamps hadn't arrived yet, but it was fortunate that locomotives have both names, numbers  and wheel arrangements to help someone like me find the right one. Mind you, even I can recognise a Stirling Single!

As well as the wonderful Warspite in the Duke of Edinburgh competition, there was a smaller model of the ship entered in the competition classes. I have to say that I found this absolutely stunning, as it achieved a degree of detail that I really thought was impossible in a model at even this fairly large scale (about 1:72). From rope ladders and the part-furled canvas cover over the foredeck this was the best ship model I have ever seen - full stop! My Dad is an absolute Warspite obsessive (he has made his own 16-foot model of the ship) and I can say that despite the abundance of detail, the model on display this one captured the essence of the ship rather than seeming crowded or overdone. 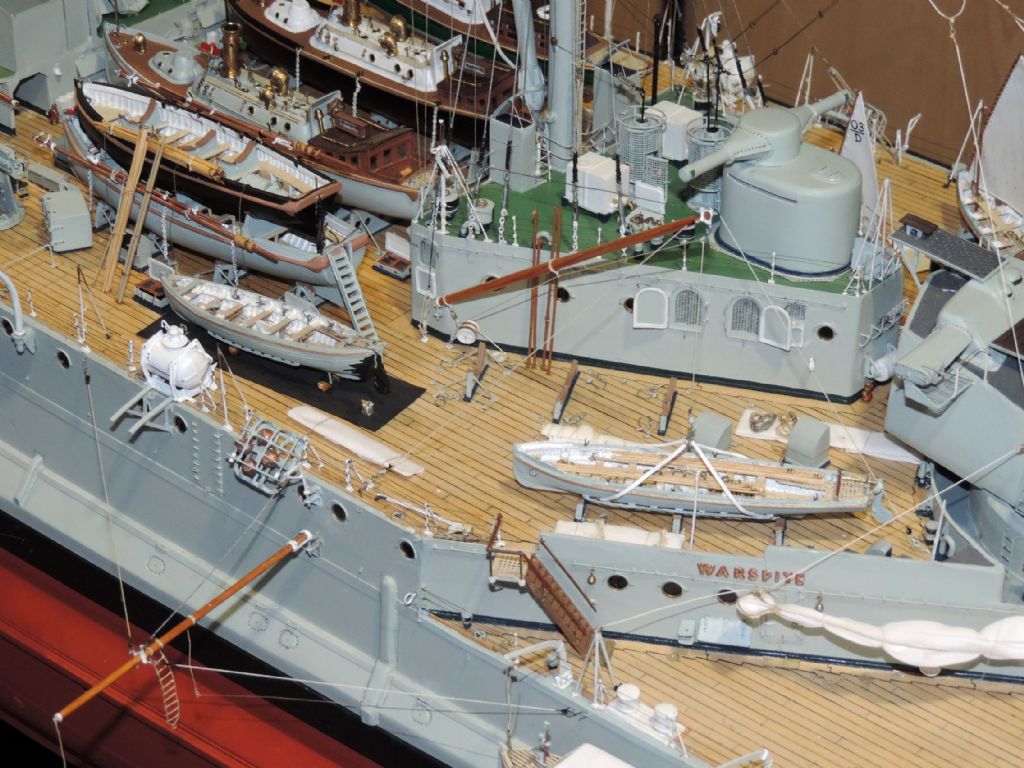 I won't say too much about the competition entries, except that this year's collection is exceptional, the standard is amazingly high. This loco by Giancarlo Mastrini speaks for itself:

On returning to the main hall, the crowds were queuing up to get in...

... and the exhibitors were getting up steam...

...quite literally in some cases!

One nice things about an exhibition like this is seeing some well-known models. I've seen Chris Vine's Bongo several times, but the mirror-flat finish on the tender never ceases to amaze. And what a superb ambassador for the hobby Chris is - he engages with youngsters (and parents) who grab his books with the same enthusiasm as the next PS3 game! 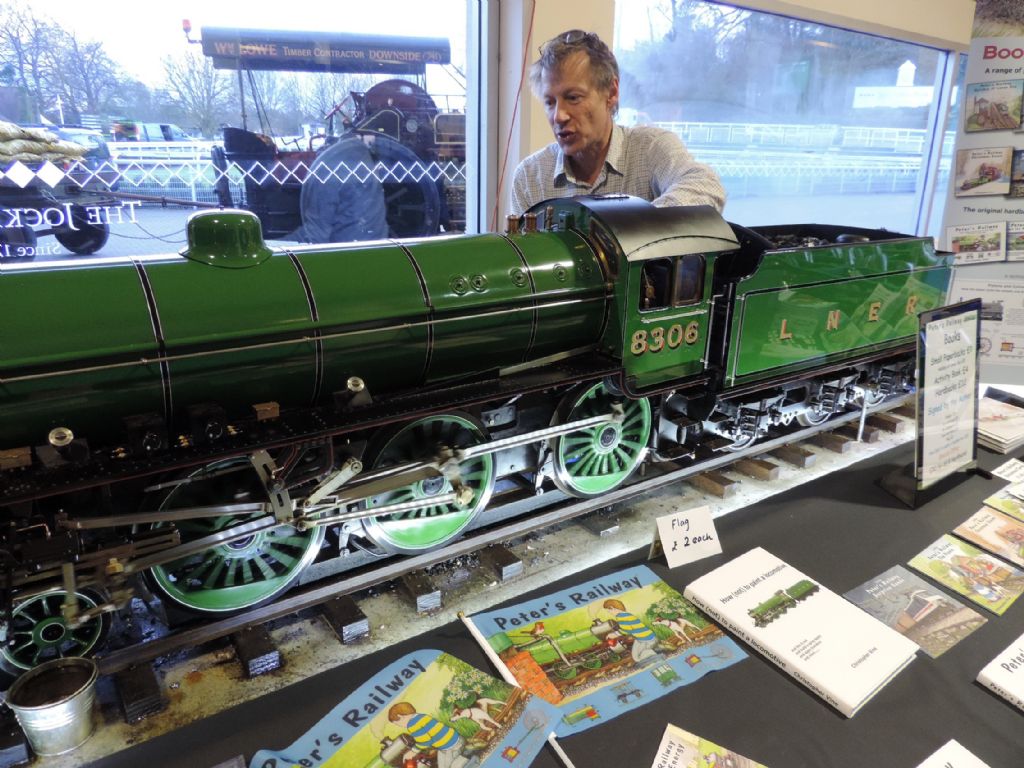 Another loco it was lovely to see was B. Terry Aspin's 'Golly Gosh'. A man who must have had a great sense of humour - having also brought us Chuck - the cartoon engineer who foreshadowed so many of my own workshop cock-ups!

Another model I recognised was Admiral Bacon's coastal breech-loading gun, recently discovered in the SMEE collection and cleaned and conserved by members. A talented engineer, he was responsible for the installation of these huge pieces of ordnance, but also made this well-finished model himself.

I won't say too much about tooling, as I will cover his in detail in MEW, but a display of different tools designed by George Thomas was testament to the man's ingenuity.

There was a chance to try out some technique as well on the SMEE stand. After an indigo -handshake from former ME technical editor, Neil Read, he gave me some guidance in the art of scraping. My quick try on his test block hasd an interesting effect - the evenly spaced blue dots got closer together, in the middle of the block - and I lost all contact round the edges! More practise needed.

The Napier Power Heritage Trust had a couple of Meccano models, one a cross-section of a Lion engine , the other a skeletonised Mobil Railton Special. I was a little disappointed not see anything about the marinised versions, having modelled two boats powered by these monster engines.

There was a lot of interest in the Maker section, with many interesting 3D-printed items, all showing surprising improvements in surface finish as the budget machines work to ever closer tolerances and have greater rigidity. I spoke to one chap who was exhibiting a couple of 3D printers - he was keen to encourage me to make my own, but warned me that a particularly robust one involved some challenging metalworking. I hope he gets the chance to see just what traditional model engineers are capable of! then again, the maker's interests do overlap well with those of model engineers - who would have thought you could 3D print a stirling engine?

I was fascinated by a display of recycled instruments. These showed a great deal on ingenuity and some sounded really impressive while others are more 'experimental'. The maker works at the Royal College of Music so be sure they are meant to be used in anger!

It's worth mentioning Pi-Top - this 'laptop' will run a raspberry Pi with a planned cost of £200! Pictured is a prototype with 3D printed case. The final version will allow you to pop in an upgrade to run it as a full PC - that could cost around £35!

There were some fantastic scratch-built model cars. rather than showroom condition, these replicated the patina of the raceworn machines to be seen in many full-size collections. Mike Hawthorne's Lancia was exquisite.

I know that past visitors have commented on catering prices, but this didn't seem to deter hoards who packed out the cafe!

Outside the exhibition were several full-size traction engines in steam. This Fowler Compound of fairly modest proportions gave off a nice aura of warmth, so I stood by its boiler for a while! A mis-parked Citroen caused access problems all day - I'm not sure why they didn't just pull it out of the way ;-)

Newchapel Junction is a Gauge 1 layout, operated by a friendly bunch, who completely blew my mind describing their signalling and block movement arrangements! I had flash delay problems, so it took some time but with their help I finally got this nice atmospheric shot of two trains passing at Newchapel Town station.

It was worth lying on the supplied bits of fluffy carpet to view the underside of their layout. The electromechanical control systems for points, signalling and turntable are as impressive as the engineering models on display.

IC enthusiast will not be disappointed, there were plenty of fine engines on display, both piston engines, like this Bentley BR2, and also another fine stand by the Gas Turbine Builders Association.

I can't list all the trade stands, but this beautifully finished Myford Connoisseur was on display and attracting much admiring attention. Among other things it was fitted with a taper turning attachment, a much-missed accessory that had been discontinued, but is now being made in the UK along with a number of other new accessories for series-seven lathes.

At the opposite end of the scale, one trader offered this wee tool, which could possibly double as swarf-rake?

There were some really outstanding Club Stands. I have already mentioned SMEE, but a few others include the Steam Boat Association, with the full-size steam launch Chimera II.

Having a soft spot for 'characterful' diesel shunters, I really like this pair on the High Wycombe stand. they are not super detailed, but I think they offer much more interest than some of the 'tin box' industrial shunters.

I can't show a picture of every club stand, but the Canterbury club's lovely display of locos is a good example.

The Surrey SME showed a wider range of models, including a Hipp Clock (that was far to well made, I could have starved waiting for the Hipp Toggle to toggle!) and a replica colt revolver.

One nice thing about club stands are some of the oddities that appear, perhaps with only a slender association with model engineering, but still of great interest. This camera system, combining a Hasselblad and a TV camera, mounts on the weapon rail of a Hawk fight, and was used for classic pictures such as the famous ones of the Red Arrows, QE2 and Concorde.

An unexpected event was the arrival at the exhibition office of the grandson of Mr F.G.Arkell with his wife and their grandson (who loves the trams!) They had a marvellous archive of Mr Arkell's boating activities reported in ME and English Mechanics, including a photo of a Steam Pinnace which won a silver medal in the 1936 ME Exhibition.  W. H. and F. G. Arkell held the British tethered Hydroplane record in 1907 with their boat Moraima at 9.71 miles an hour. the boat also won them a Bronze medal at the model Engineer Exibition that year. The current record is over 140 mph!

There's more to tell, not least that he appears to have know Percival Marshall and E.T. Westbury as well. Hopefully, his grandson will join us and we will see some interesting discussion on the forums.

Finally, there was this little of assortment of models by yours truly. I must say I felt decidely nervous having them on display in the company of such incredible handywork. I hope my choice of 'interesting' subjects to model made up for some of the shortfalls in execution!

Congratulations must go to Mike law, Ivan Law, Steave Eaton and Mike Chrisp for their tireless work in planning the exhibition, as well as the many Judges, exhibitors, clubs, stewards and MTM staff who have helped make it a great event for everyone attending. I'm sure that this year's exhibition will go down as a vintage one for the standard of competition entries, and that the last two days of the exhibition will be as successful and enjoyable as the first. I'm really looking forward to going back on Sunday to spend more time looking with my eyes, instead of a camera!