Peter Gabelish got in touch after reader Andre Rousseau told him about our Apollo cover last year, he passed on this remarkable story and photograph.

The Sight of a Lifetime

I am a long time resident of Cronulla and hold a Seniors Card. I’ve had an eventful life thus far. Born in the late 1920’s I plan kicking on for a while yet. I’ve extracted the following from my lengthy memoir which I hope to publish one day.

The following adventure was precipitated by my being an employee of a large US computer company and I was on my way home after a training course in the states. The dire straits of the three Apollo 13 crewman after their shattering message - ”Houston. We have a problem” had the world transfixed; particularly in the USA.

Leaving the US I diverted to Auckland on the way to Sydney and chanced to observe a once in many lifetimes occurrence. I wrote my recollections of the event for Professor Bill Keel of the University of Alabama to put in his blog of Apollo information and sightings, all observations made from the ground except for mine. Below is as it appeared in his blog and should be available to the world on the internet.

I found myself on a southerly flight across the Pacific to Auckland with the vague feeling that our route would be close to Apollo 13's re-entry trajectory. I was on my way home from a stint in the US and Apollo 13 was big news, particularly in the States, as the three crewmen on board the stricken spacecraft fought for their lives. We were no sooner seated for take-off than a rather excited captain announced - "you may or may not be aware that we are expected to see Apollo 13's re-entry into the earth's atmosphere. We are in communication with Houston and will be the first to see the returning spacecraft. Houston want us to remain in contact until vehicle recovery".

Much excitement on board as everyone who had a camera set it up for the spectacle. I had a camera that allowed me to set shutter speed, aperture etc., unlike the average modern camera that won't let you do much except point and shoot. Having figured out what I thought would work I proceeded to advise a fellow passenger on settings. It turned out that he was a professional photographer assigned by a newspaper for the event. Typical Gabelish. I hope he appreciated my advice as my photos came out beautifully on my basic equipment.

With the cabin lights out we waited expectantly. Running about two minutes behind schedule a brilliant fire ball, like a massive Very light appeared over the starboard horizon ahead of our path! Travelling horizontally, an incandescent, silver plume of brilliant light, leaving a blazing trail of constant width behind it, arced in from the west at an altitude that didn't appear to be much higher than ours. The silver phosphorescent tail it left behind seemed to retain its brilliance as a curved band of luminescent material while the leading body continued at constant velocity across our path leaving the magnificent arced trail behind it. I presumed the trail to be the vaporized aluminium and magnesium materials from which the capsules were mostly constructed. My immediate reaction was that no one could possibly live through the incredible fireworks and that all must be lost. Every few seconds a bright yellow-orange spark would branch off the main spearhead and arc away on a different trajectory.

The incredible display continued across our path and arced towards the eastern horizon on our port side. The inferno diminished while still within our sight. When it died out, a minute red dot continued on the east-bound path, curving out of sight over the Eastern horizon. This was the command module with its glowing heat shield that had survived the impossible inferno and miraculously had living humans inside it. My eyesight was better than average at this stage of my life allowing me to see the tiny speck which would most likely have been invisible to most. I would guess that the whole display lasted four to five minutes. 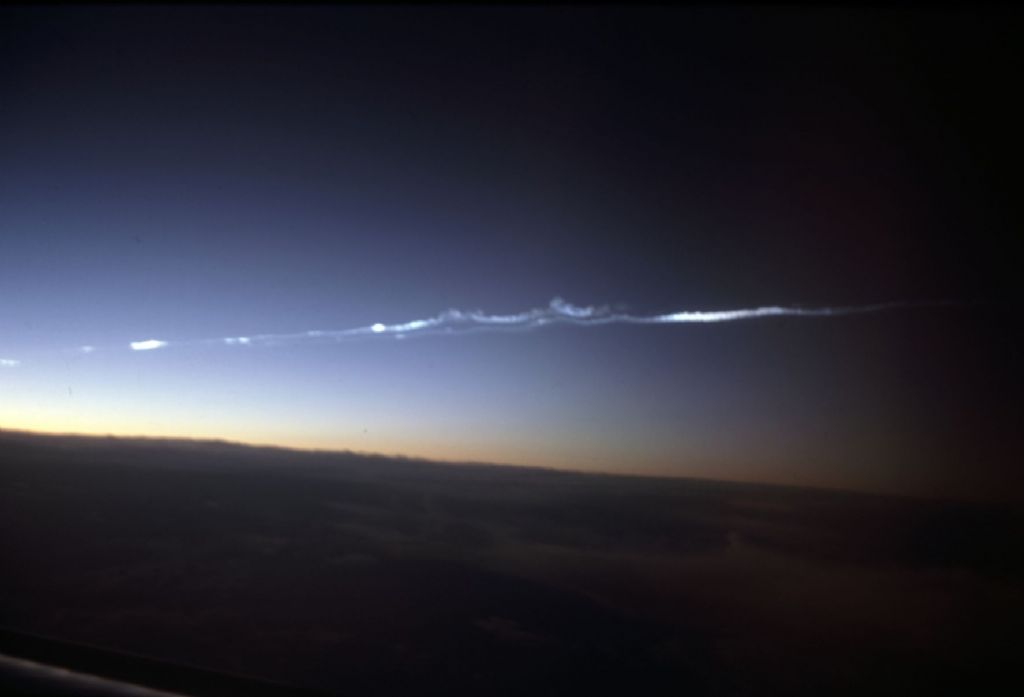 We were fortunate that the whole re-entry was seen in total darkness. Just seemingly moments later the captain said that a successful recovery was in progress some thousand or so kilometres away in the Eastern Pacific; prompting spontaneous applause from us passengers. Several minutes afterwards day began to break and the trail of vaporized metal was visible hanging in the upper atmosphere for the next twenty minutes or so affording me the chance to photograph it as it hung there. The next morning the Auckland Star newspaper carried a photograph of the re-entry proclaiming that the passengers on our flight had been the sole witnesses to "The Sight of a Lifetime". It seemed that their photographer was lucky enough to get it right too! Perchance he used the settings I’d given him?

The Honeysuckle Creek tracking station played an important part in the tracking of Apollo 13. They printed a card to celebrate the rescue on which they used my coloured slide with acknowledgement of the photographer.