Looking around for something that would leave my mark on the Colchester Society of Model and Experimental Engineers, of which I have been a member for some years, I decided, after some discussion with other members, that an axle weighing machine incorporated into the steaming bays at the site could be the answer. 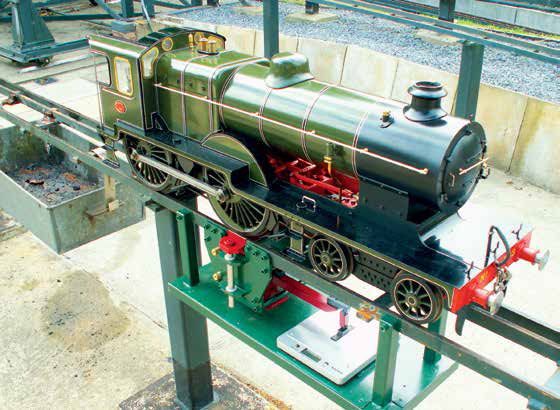 Photo 1: The weighbridge in use at Colchester.

The purpose of the weighing machine (photo 1) is to enable members of the society to weigh individual axles of a new locomotive so that the springs can be adjusted to ensure that all the coupled wheels take an equal share of the load and therefore the drive. Bogie and truck axles can also be weighed, if required, and older engines can be improved.

I have not given a detailed description of the methods used in the construction of the components, designed and made, as I am sure that anyone setting out to copy the design will have their own idea of how to proceed. Also, of course, the materials available will undoubtedly differ. I will supply simple drawings of the main components with enough dimensions to give an idea of the size of my original device. There will also be some photographs for guidance.

The first thing to do was decide on the form of sensor/readout to be used and then design a mechanism to transfer the weight of the axle to the chosen sensor. On searching through back copies of Model Engineer, a short article on a simple device, designed by Geoff Moor of the Guildford Society, was found. This device incorporated a bathroom scale to measure the weight and it was decided to use this as a starting point, even though it was felt that the design of a more sensitive read out device would ultimately be required.

A search was made on the Internet for a sensor/readout combination that would cover the weight range required and be more accurate than the average bathroom scales. Many options were found but unfortunately they were all considered to be far too expensive. At about this time I happened to be in the kitchen when ‘she who must be obeyed’ was baking and I spotted the electronic scales she was using. These scales are enclosed in a slim plastic box, have a clear electronic readout and displayed the weight in grams or pounds and ounces. Here! I thought, is the very thing I have been looking for. The only drawback - and there always seems to be one of those - was that the maximum reading for these scales is only eleven pounds and the maximum weight, taken from Geoff Moor’s article, that can be expected on any single axle is around one hundred and eighty pounds. A simple mechanical way of converting the range of the scale to that needed was the next requirement. The solution adopted is to use a beam (lever] system to carry out the conversion.

Considering fig 1, if the axle weight B is applied to the lever half an inch from the fixed pivot A, and the resultant force C is applied to the scale at eight and a half inches from A, the scale will read one seventeenth of the force applied at B. The Arrow heads in fig 1 indicate the direction in which the force is operating. It therefore follows that if the reading on the scale is multiplied by seventeen (two times eight and a half) the correct weight will be found. In practice it was found that the true factor for the system as eventually built is sixteen point two. The system then converts the scale to read a maximum of eleven pounds at C multiplied by 16.2, or 178.2 pounds at B. In practice it has been found easier to work in grams and convert to pounds once the weight in grams has been found. The reason for this preference will be explained later in this article. 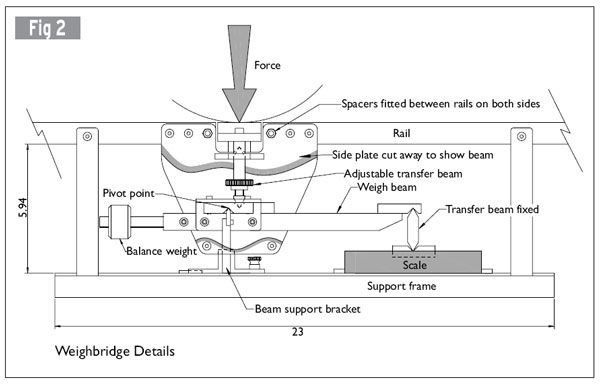 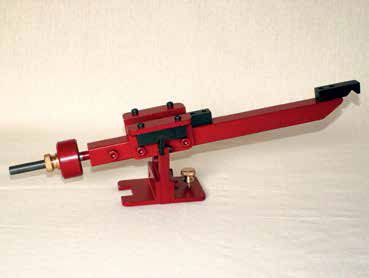 The mechanical solution is illustrated in fig 2. The weigh beam is supported on two Vee blocks mounted on quarter inch mild steel brackets bolted to each side of the beam. The beam (fig 3 and photo 2), in my case, being an eleven inch length of ¾ inch mild steel tube. The Vee blocks are produced from ½ inch square gauge plate, hardened, tempered and chemically blacked. The Vee blocks are supported by two knife edges, also made from hardened gauge plate and mounted on a support bracket (fig 4 and photo 3) which in turn is mounted on the system base plate. The weight of the axle is transferred through the adjustable transfer link (fig 5 and photo 4) and another Vee block and knife edge between, and half an inch ahead of, the fixed pivots, as in B in fig 1. The adjustable transfer link is included to allow for final levelling of the rails before a reading is taken. The adjustable link incorporates a thrust bearing mounted in the round, knurled brass section to reduce the turning force required when a heavy locomotive is being weighed. (This will be explained later when we come to using the weighbridge.) 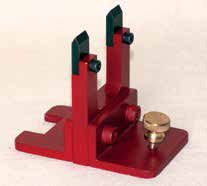 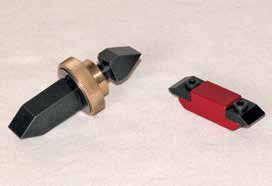 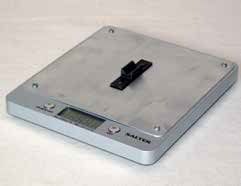 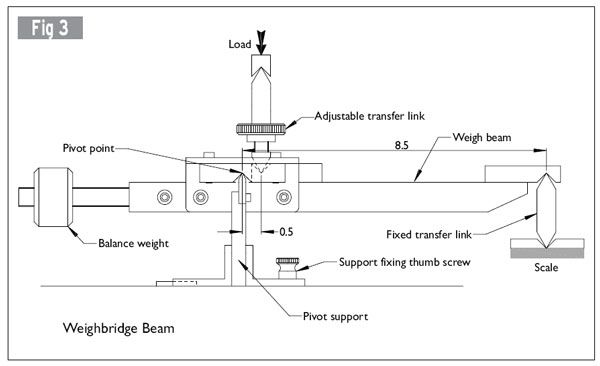 A third pair of Vee blocks and knife edges are used to transfer the weight from the end of the beam to the modified kitchen scales. It can be seen that the four Vee blocks mounted on the beam are all in line on a horizontal plain as they should be for a true reading. It could be a slight error in this respect - or maybe in the true position of the Vee blocks - that caused the small difference in the conversion factor mentioned above. A very small error in the half inch dimension would account for the error. The round balance weight, on the opposite side of the fixed pivot, (left as drawn in fig 3 and photo 2) is used to balance out the weight of the mechanical parts of the system and is locked with a brass thumb screw enabling a true weight to be obtained. 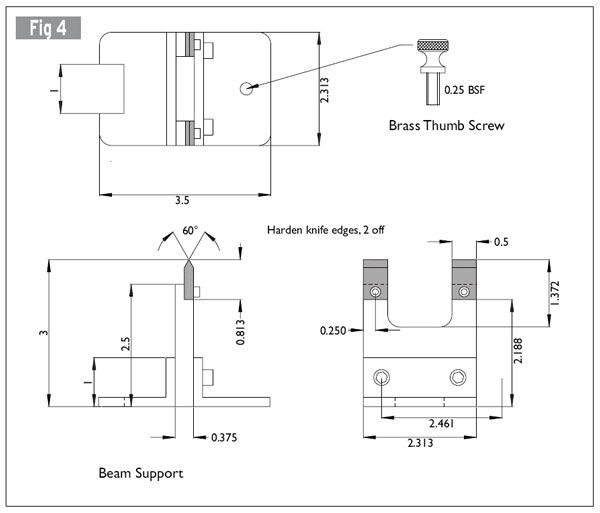 The modification required to the scales turned out to be very simple. A thin, brushed stainless steel disc on the top of the scale was peeled off to reveal two screws. Undoing these screws allowed the upper half of the body to be lifted away from the load cell mounted in the centre of the bottom half of the scale. Another Vee block was made from half inch square gauge plate and screwed to the load cell using the screws removed above. A light weight aluminium cover plate was fitted with a cutout made to clear the Vee block to improve the appearance and job done (photo 5). 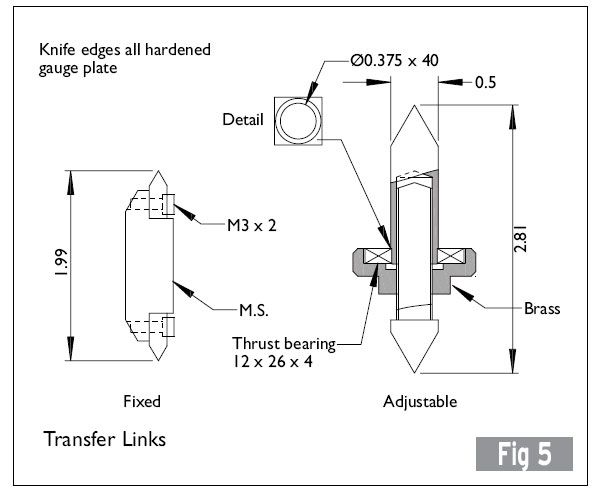 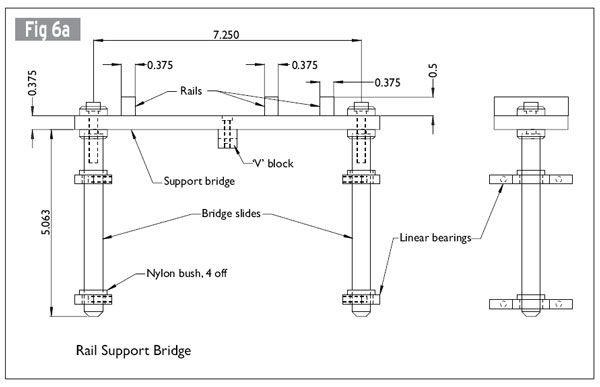 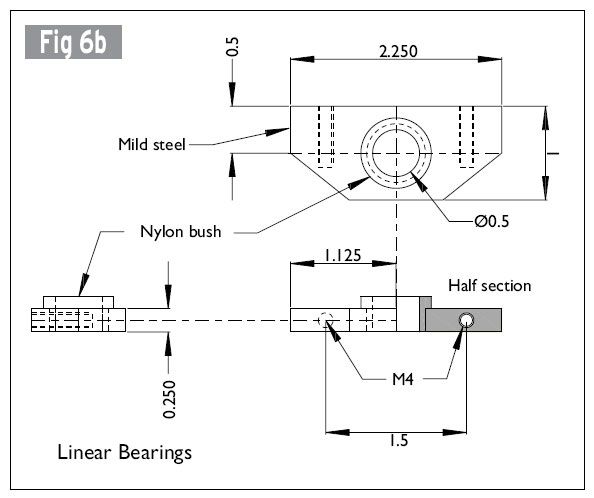 Having finalised the sensor/ readout details, the next stage was to sort out a way of supporting the locomotive whilst reading the force applied at each axle in turn. A two inch section of the 3½ and 5 inch rail of the raised track in the steaming bay was removed and replaced by three short sections of rail mounted on a bridge piece supported in the gap (fig 6 and photo 6). To maintain the alignment of the original 3½ and 5 inch rails when the two inch sections were removed, two quarter inch thick side plates were cut out and bolted in place, one on each side of the 5 inch rails (fig 7 and photo 7). The bolts used are actually long studs passing through all three rails and two plates with spacers between the rails to locate and support the third rail. Each of these plates also carries two support brackets fitted with nylon bushes, also visible in photo 7, which are used to guide and retain the bridge piece supporting the short lengths of rail whilst still allowing it to move in a vertical plane and transfer the axle force to the weigh beam as required. I initially made the nylon bushes a smooth sliding fit on the ½ inch diameter stainless steel support rods that are attached to each end of the bridge piece. This proved to be a mistake and the bushes had to be opened up by about 10 thou each to make the bridge piece slide freely up and down whilst still guiding it as required. Any interference with the free vertical movement would obviously affect the readout. 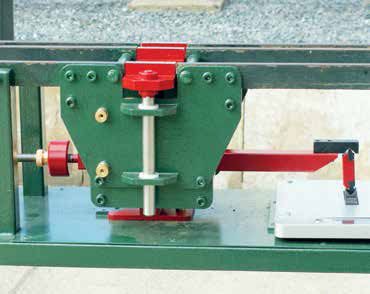 Photo 7: The side plate. 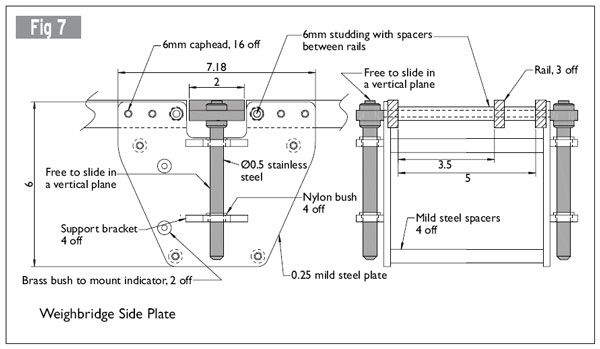 It was found that when a locomotive is at rest with one axle resting on the weighbridge, the short lengths of rail are slightly depressed and the adjustable transfer link has to be adjusted to bring the rails back into alignment before a reading can be taken. To make this possible, an indicator has been added (fig 8 and photo 8). The indicator consists of a back plate, which carries the fixed datum, engraved line, and a pointer mounted on a fixed pivot bearing. This plate is mounted on one of the ¼ inch side members via two brass threaded bushes and thumb screws. The opposite end of the pointer carries a balance weight which ensures that the pin from its back remains in contact with a second pin extending from a clamp on the adjacent bridge support side rod (fig 8 and photo 9). The short distance of the pin from the pivot relative to the length of the pointer ensures an amplified deflection of the pointer from a small deflection of the rails. I will later give a description of how the indicator is used in practice. 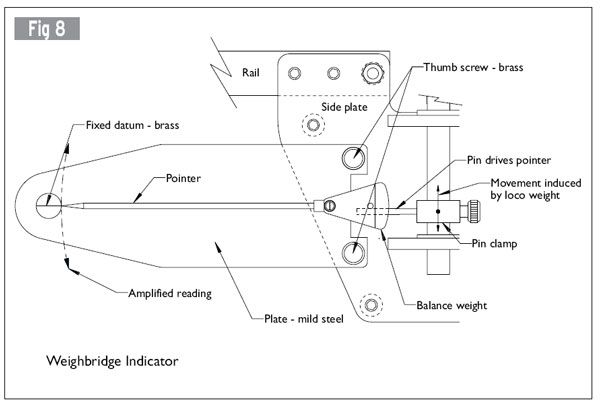 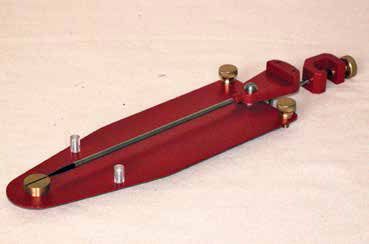 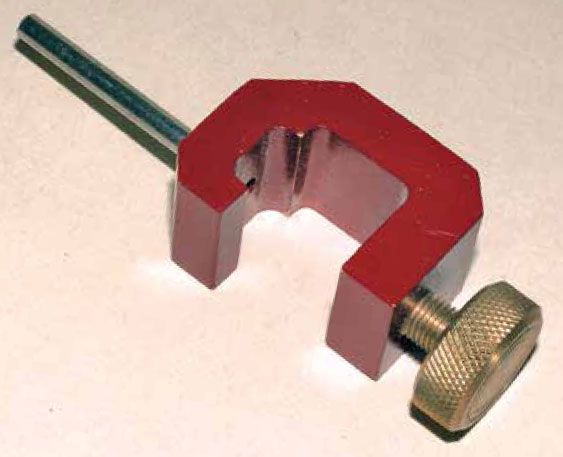 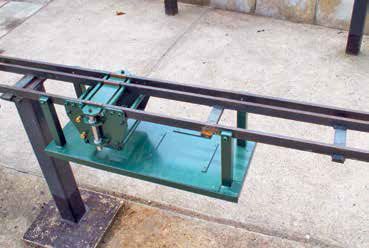 Photo 10: The frame to carry the scales.

To support the weigh beam and scales, a frame was constructed of mild steel square tube and steel plate (fig 2 and photo 10). The frame is bolted to the track in four places and remains as part of the track under a steel cover when not in use. The frame is painted green to match the other track components. There is a simple steel block, bolted to the base plate, which serves to locate the beam support bracket, that has a brass thumb screw to lock it in place. There are also three mild steel strips riveted to the base plate to locate the scales when in use.

From the photographs it will be seen that some of the components are painted red instead of green. These red components are stored, along with the scales, in a fitted box in the club house when not in use (photo 11). It only takes a couple of minutes to assemble the unit ready for use. 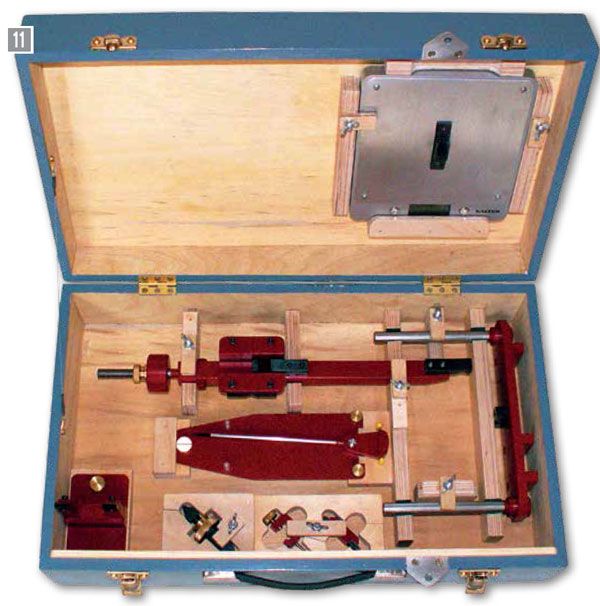 Photo 11: A case contains all the removable parts.

Photograph 1 shows Norman Barber’s 5 inch Maid of Kent 4-4-0 at rest with its front driving wheels on the weighbridge. The indicator is not fitted in this picture but the two brass bushes on the side plate used to attach it can clearly be seen.

If a member of any other society is looking for a project, please feel free to copy my design, with any improvements you consider necessary, of course.

My next project …? Someone has mentioned a club dynamometer car but I feel I must get on with my 3½ inch Black Five for a change.