The latest issue of Model Engineer is issue 4673 (10 - 23 September 2021).
If you are having difficulty purchasing your copy please consider a subscription. Have your favourite magazine delivered to your door! 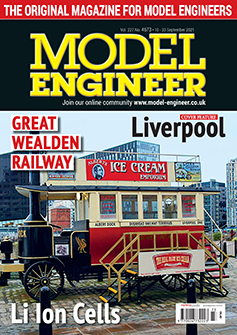 Roger Backhouse takes a day out in Liverpool and enjoys an ice cream in a repurposed steam bus while Malcolm High sings the praises of lithium ion cells as a useful source of electricity.

Ron Fitzgerald tells how Matthew Murray, and others, attempted to get around Boulton and Watt’s patents on various features of their steam engines.
Malcolm High extols the virtues of lithium ion cells as very useful portable sources of electricity.
Our ‘Showcase’ features two 5 inch gauge engines from David Murray, a member of the Staines Society of Model Engineers.
Peter Seymour-Howell tackles an interesting feature of his 5 inch gauge Flying Scotsman – the Cartazzi axle for the trailing wheels.
Frank Cruickshank makes the baseplate to complete the construction of his Van de Graaff generator.
Luker makes a set of springs for his 5 inch narrow gauge Australian locomotive Ballaarat and then moves on to make the coupling and connecting rods.
Adrian Garner makes the remontoire, escape wheel and pallets for his astronomical bracket clock.
Paul Carpenter looks back over 25 years of Michael Cadiz’s Great Wealden Railway at Biddenden, Kent.
Mike Tilby concludes his story of the LMS Turbomotive with some more information on the power transmission.
Philipp Bannick makes the column for his radial boring machine.
Roger Backhouse spends an engineer’s day out in Liverpool, home of the Beatles and the Liver birds, and discovers a much changed city.